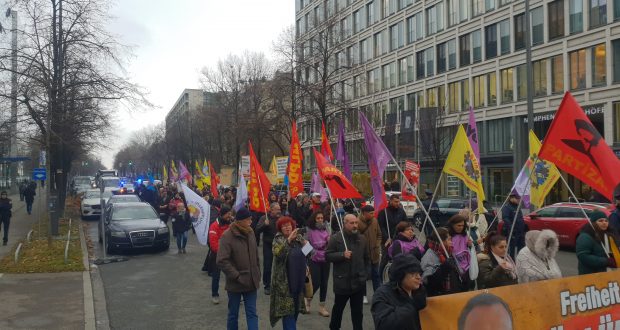 News Center | 04.12.2019 | In the Communists‘ case in Munich, a march began in front of the court for Müslüm Elma, who is still under arrest. Within the framework of the “Freedom for Müslüm Elma” campaign launched by ATİK between 4th November and 2nd December, the last action was held yesterday with the participation of democratic organızaions such as AGIF, ADHK, Assyrian Assembly and MLPD.

Before the march, various speeches were held at the rally in front of the court hall. The first word was given to Antonia V. D. Behrens, the lawyer of Müslüm Elma. Behrens gave information about the case, and told that Elma’s morale is very high and that he greeted those who goes out to the street.

On behalf of the German Marxist Leninist Party (MLPD), the co-organizers of the action, Gabi Fechtner, Secretary General of the MLPD, spoked. Fechtner emphasized on Müslüm Elma’s past and told that “Müslüm Elma is an exemplary communist who has never broken with his struggle and doesn’t bow”. She further emphasized that this case is essentially a case against communism by imperialism and that all socialism and communism supporters should solidify with TKP-ML in this sense.

After Gabi Fechtner, the speech was given to ATİK Co-Chair Zeynep Çalışkan. In her speech, she condemned the political case once again, urging the struggle to grow: ”Although this is the last day of our campaign, there is no doubt that our struggle is not over. On the contrary, the struggle will continue until the day we get Müslüm Elma.” Finally, she thanked all the organizations who involved and supported this campaign.

Finally, Yildiz, Lothar and Ulli were given flowers and applauded because they followed from the first day of the courts that started in 2016 and did not leave the prisoners alone.

During the march in the center of Munich, slogans “Freiheit für alle politischen Gefangen”, ”Freiheit für Müslüm Elma” and “Hoch die internationale Solidarität” were often shouted. Grup Umuda Haykırış brought enthusiasm to the march with the marches they sang during the march. The action ended with speeches by AGIF (Migrant Workers Federation in Germany), Courage and SYMP and Assyrian People’s Assemblies.

Following the suspension of the arrest warrants for all revolutionaries except Müslüm Elma, ATİK started a one-month intensified campaign in front of the Munich State Court on 4th November for the release of Elma under the motto “FREEDOM FOR MÜSLÜM ELMA ”.

Although the participation of international lawyers to the court on 18th November was organized, the lawyers could not attend the hearing as a result of the cancellation of the hearing on that day. However, this event will take place at a later date, which is appropriate for the lawyers.

On November 27, friends who had managed to survive the 1980 process in the Diyarbakır Military Prison together with Müslüm Elma and who knew Müslüm from Diyarbakır attended the hearing. The appeals prepared by the 21 Diyarbakır prisoners who knew Elma were presented to the court by the lawyers.

In addition, many revolutionary institutions, individuals and politicians made statements of solidarity and special programs were organized on television channels.

Freedom for Müslüm Elma Campaign ended with a rally in front of the Munich State Court on 2n December followed by a march. 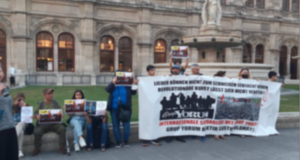 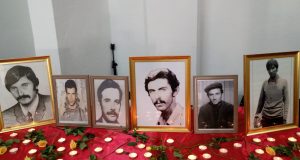 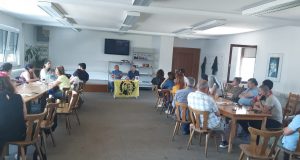